“By the People: Rebuilding Liberty Without Permission,” by Charles Murray 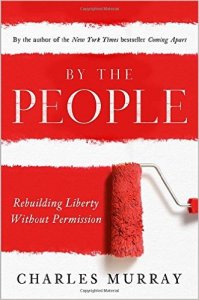 “The political process in Washington is systemically corrupt in ways that make fundamental reform impossible. Not improbable but impossible.” — Charles Murray

1) Author Murray has two chapters explaining why rolling back the regulatory system through the normal political process will never happen. Murray’s thesis is that it’s not just improbable but impossible. The only way to reduce government power is through civil disobedience—by refusing to follow pointless, stupid, or tyrannical regulations; preferably with the assistance of a nonprofit legal assistance organization (The Madison Fund).

Do you agree that a political solution to the problems of over-regulation is impossible? What do you think of Murray’s civil disobedience solution?

2) Murray decrees a government system that allows workers to arrive late, leave early, and then complain about how things aren’t accomplished because they are understaffed. Murray suggests one of the reasons for poor government worker performance is public unions. The public employees’ unions are so powerful that the mayor and city council owe their elections to the unions. The key to better government functioning at every level is prohibition of unions of public employees.

Are public unions necessary? Should they be abolished? Can you think of other solutions to help ensure that public employees are as productive as private workers?

3. Murray predicts that, in the future “there will be too much money and too many technological resources to make today’s leviathan government necessary.” Murray points out that many of the asymmetrical data problems that gave rise to regulation at the beginning of the 20th Century no longer apply in an age where such information is at the consumer’s fingertips?

Is the internet rendering the need for consumer protection laws obsolete?

4. “By the People” contains some startling statistics. For instance, in constant 2010 dollars, the federal government’s budget was 38.0 billion with 9.4 billion of that going to service the national debt. In 2010, the federal budget was approximately 3.4 trillion.

Were you shocked by the magnitude of the federal government’s expansion? What about the fact that there were only about twenty federal crimes throughout the 19th Century compared to 4,450 federal crimes as of 2007?

5. How optimistic are you about the future of the individual freedoms of Americans?